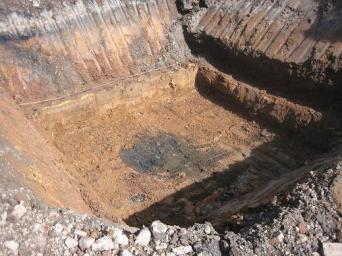 Description: Funded by Advantage West Midlands, Bilston is currently undergoing a major redevelopment. Before development could take place the site required the stabilisation of extensive shallow mineworkings & associated mine entries primarily in the Staffordshire Thick Coal.

Spread over an area of 12 Hectares, the project lasted for 32 weeks in which time over 47,000m of drilling was carried out and 10,000 Tonnes of pfa:opc grout was injected. A total of 13 mineshafts were also located and treated as part of the works.

Description: A major supermarket development to be built in Longton required the stabilisation of extensive shallow coal workings and associated mine entries. Working under strict time constraints and site restrictions due to both client requirements & other contractor’s works, a total of 500 boreholes were drilled to an average depth of 25 metres.